Below is information about the gemstone on the Tree Agate Pendant Necklace. 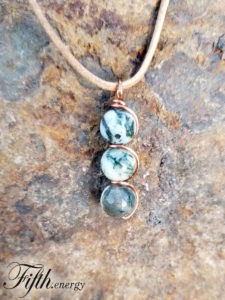 Tree Agate is a beautiful white and green stone that has been thought to have a deep connection with nature.  Tree agate is also known as dendritic agate. Dendrites are crystal inclusions.  In tree agate, the dendrites create a green dappling effect on a white base that resembles foliage. The ancient Greeks associated tree agate with dryads and sometimes buried the stone in agricultural fields to promote a plentiful harvest.

Agate was thought be have first been found in the Achates River in Sicily.  Egyptians were making seals, rings and vessels from agate stones at least 3000 years ago. Agate was used as talismans in Egypt, Greece and India.

The inclusions that resemble vegetation in dendritic agate are from the presence of manganese and iron oxides that made their way into cracks of white quartz as it formed. Tree agate is sometimes mistaken for moss agate, but they contain different mineral traces. Tree agate is found in Australia, Brazil, China, India, Kazakhstan, Madagascar, Mexico, Mongolia, Namibia, Uruguay and the United States.